I have had a week's leave from work and in addition to catching up with jobs around the house while my husband was at work and the children at school, I took the opportunity of arranging a shopping trip to Bristol with my friend, Lisa.

I have known Lisa for many years. We have attended the same Church since we were at school and our families have enjoyed each others company at lots of Church social events and functions. You may remember that it was Lisa who finally persuaded me that I should start to wear trousers nearly two years ago. Lisa and a few other Church  ladies had bought trousers a month or so before me after our new minister told us that it was acceptable for women to wear trousers that were specifically made for the female body.

Lisa wears trousers far more than I do and also wears jeans. She always wears them modestly however with a tunic or similar garment covering her rear (see below) 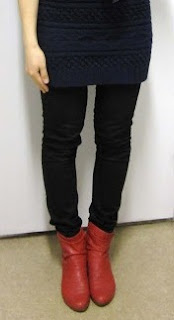 I have worn skirts and dresses exclusively since May as I still prefer them when the weather is warm and it is still remarkably mild for November (although dull and overcast). I did venture into leggings recently but have resisted jeans as somehow I just don't like the image and I have an aversion to denim.

Lisa has been trying to persuade me to get some jeans and my daughter Hannah would like a pair as some of her her friends wear them. The answer has been no in both cases! However, on our expedition around many large clothing stores in Broadmead and Cabot Circus, Bristol, Lisa wore me down and selected a pair of skinny jeans in my size and guided me towards a changing room booth. Luckily, I could take a quick photo with the aid of mirrors and here is the result.

It is not an image I like as it goes against all my modesty standards. I found the jeans clung to my legs and bottom in a rather uncomfortable way and revealed far too much of the shape of my body. They were far tighter than my trousers but on a plus side the denim was not so heavy as I expected. Lisa was hoping that I would try some other styles but one pair was enough for me and we adjourned to a cafe for a well earned coffee!
Will I ever buy some jeans? - you never know but they won't be skinnies!
Am I the only person out there that does not wear jeans?