The Pressure of Work 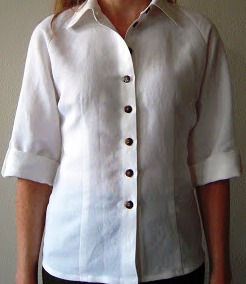 I have been having a difficult time at work since our holiday. It is the end of the 2015/16 financial year and our clients are all keen for their accounts to be finalised as soon as possible. I have had to work extra hours and the stress is beginning to tell. Being in charge of a section, the buck stops with me! I am not sleeping well and I am getting ratty with the children for no particular reason.
I am still escaping for the odd half hour by reading my friends latest blog posts but I am longing to spend a day in the garden now that the weather is improving or going for a long walk with my family in the countryside to unwind completely.
If my job continues to affect my health I will have to give serious thought to making some changes to my career. My husband has told me that my health and happiness is far more important than money.
Even my charity shop searches have taken a back seat recently but I did manage to find a short sleeved shirt for work for £1.00 on a bargain rail. It is cotton and slightly unusual with black buttons. There is no label so I don't know the original manufacturer.
Posted by Rebecca Young at 11:18 10 comments: 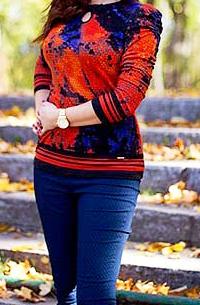 We crossed the Irish Sea to Belfast after three nights in Scotland. I hadn't been to Ireland for at least 15 years and it was the first visit for Hannah and Henry.

My outfit is another warm woolly jumper. It was quite blustery and we did get some heavy showers so warm clothes were essential. This jumper was a charity shop purchase a while ago and no doubt cost me about £3.50. I have not worn it that much but I do like the vibrant pattern. Maybe I should have worn green when in Ireland but I do not have any green jumpers! 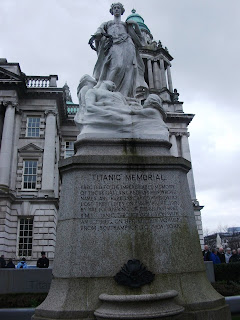 In Belfast we went on a Titanic trail as Hannah has been studying the story of the ship at school. This is the original memorial to Belfast residents outside City Hall who lost their lives in 1912. 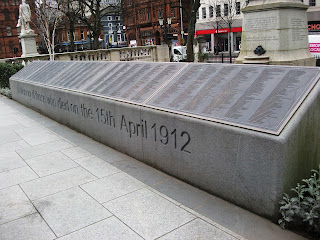 This memorial was added nearby to commemorate the centenary and contains the names of all those who perished. It was very moving looking at all the names. 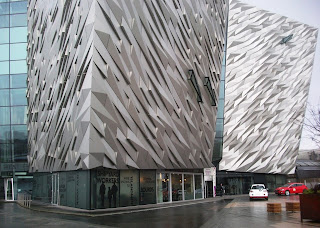 We then visited the Titanic Experience - a state of the art museum dedicated to the Titanic built in the shape of the bows of the ship - adjacent to the dry dock which was used to construct the ship. It is on four floors with interactive displays and traces the story of the ship from construction to diving on the wreck. We spent about three hours in the museum - it was so fascinating! You could even feel the heat of the furnaces when going through the story of the ship building with the noise of hammering. There were cheering crowds during the launch and the disaster was tastefully portrayed with recordings of the survivors telling of their experiences. 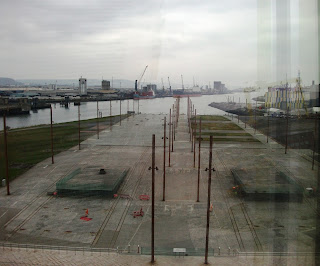 The marker posts show the postion of the dry dock where the Titanic was built. 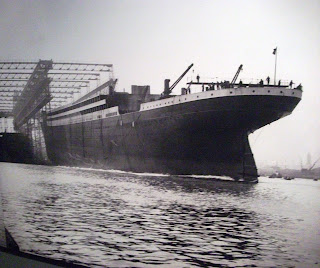 The launch of the ship - just like we were there! 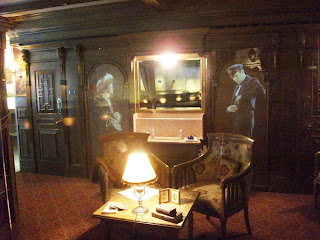 A cabin with films of two passengers which gave the impression they were actually there - bringing the display to life! 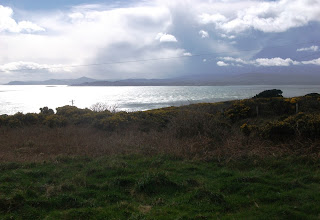 After we left Belfast we took a coastal route south towards Dublin. The gorse bushes were just starting to flower giving a yellow glow. 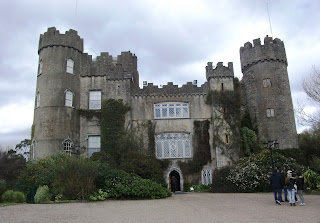 The centre of Dublin was closed to traffic on Easter Sunday for large scale celebrations so we visited this castle at Malahide instead. It is in the process of being restored and is set in many acres of public grounds.
We caught the ferry from Dublin back to England bringing our adventures to an end.
I hope that you were not too bored looking at our photos!
Posted by Rebecca Young at 08:45 19 comments: 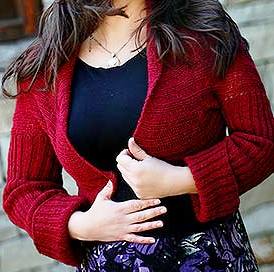 Our second day in Scotland was drier but very windy. I wore this dark red jumper which, you guessed it was a charity shop find some time ago, over a navy shirt. Please don't look at my hair - it was a bad hair day due to the wind.


We had hoped to catch a ferry over to the remoter islands but the ferries were disrupted due to the weather conditions so we headed north west into the Highlands instead. The scenery was stunning and the colours changed dramatically when the sun broke through the cloud cover. 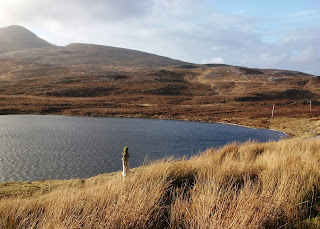 We saw several large herds of wild red deer but it was difficult to see them in photographs as they were so well camouflaged. Apart from some very isolated crofts there were no houses for miles and although we were travelling on an A class road we hardly saw any other traffic. It was so tranquil and such a change from the normal pace of life! 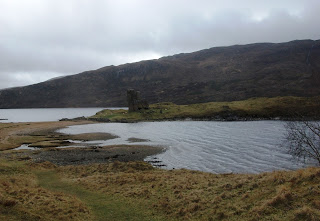 We passed the ruins of Ardvreck Castle which was destroyed by lightning many years ago and was the scene of the grizzly murder of the Marquis of Montrose in 1650! 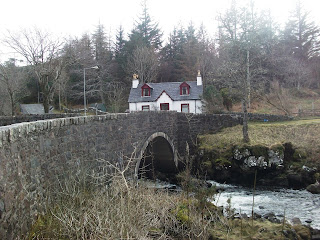 A typical rural Scottish cottage - such a lovely setting by a stream crossed by an ancient stone bridge. 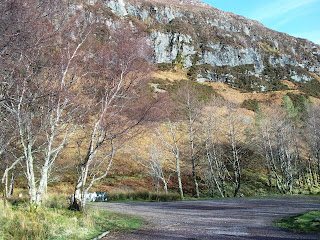 The hillsides are mainly devoid of trees but there were groups of silver birches in the glens. 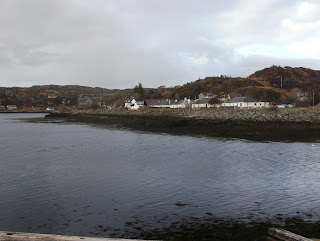 Our trip ended by the sea at this lovely little fishing port of Lochinver where we enjoyed a home cooked meal in a little family owned cafe.
Posted by Rebecca Young at 06:54 9 comments: